India on Monday lost the ONGC Videsh Ltd-discovered Farzad-B gas field in the Persian Gulf after Iran awarded a contract for developing the giant gas field to a local company. "The National Iranian Oil Company (NIOC) has signed a contract worth $1.78 billion with Petropars Group for the development of Farzad B Gas Field in the Persian Gulf," the Iranian oil ministry's official news service Shana reported. "The deal was signed on Monday, May 17, in a ceremony held in the presence of Iranian Minister of Petroleum Bijan Zangeneh in Tehran." The field holds 23 trillion cubic feet of in-place gas reserves, of which about 60 per cent is recoverable. The Union health ministry said in a statement on Monday that over 23,000 adverse events have been reported since the vaccination drive involving Covishield and Covaxin vaccines started in the country and of these 700 cases were reported to be serious. In a career of eight years, the actor -- who turned 33 on May 16 -- already has an impressive oeuvre.

The Congress hit out at the Centre on Monday over the resignation of noted virologist Shahid Jameel from a national panel on genome sequencing of coronavirus, alleging that there is no place for professionals in this government. The opposition party alleged that the "Modi government's aversion for 'evidence-based policy-making' has pushed India into the current crisis."
Cong targets govt over resignation of noted virologist Shahid Jameel
Reply
- Report Abuse
Posted : 20 minutes ago
Cipla ready to partner in Covid vaccine distribution However, Cipla was very clear it does not want to get into vaccine manufacturing. 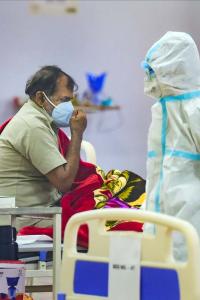 'We need to be on war footing defence against this virus.'

 Indian Coast Guard Ship Samarth responding to a distress call rescued 15 crew from a fishing boat named Milad, off Goa coast today. All crew are safe and boat is being towed ashore. The Coast Guard also rescued 12 fishermen stranded around 35 nautical miles off the Kochi coast amid rough seas due to the cyclone on the night of May 16.
Coast Guard rescues stranded fishermen off Goa
Reply
- Report Abuse
Posted : 26 minutes ago
Total lawlessness, anarchy: Bengal Guv on protests by TMC supporters Expressing concern over agitation by Trinamool Congress workers outside the Central Bureau of Investigation office in Kolkata and elsewhere in West Bengal after the arrest of two ministers and others in the Narada sting case, Governor Jagdeep Dhankhar on Monday alleged that there is 'total lawlessness and anarchy' in the state and the police and administration are in 'silence' mode.